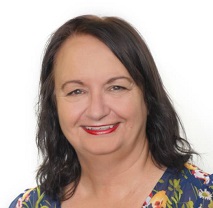 I was born and raised on traditional country in Goondwindi. All the women on Mother’s side – Mum, Nanny and Great-Nanny all come from the country.

We grew up on a reserve, living in a tin hut with no running water or electricity and dirt floors.

Mum, Nanny, and Uncle Edwin were my main teachers, and taught us how to map country, follow the seasons, and spoke with us about our culture and heritage. I attended a one-teacher school at Toobeah, but when the school closed down in the 1960’s, I came out of education at the age of 9 and never went on to finish Primary School.

Although I never attended High School, in my thirties I had the opportunity to be a part of a pilot program for Early Childhood teachers for Aboriginal and Torres Strait Islanders. So with four kids in tow, I went to University to become a teacher.

Fourteen of us went in to do the training and there’s only three who came out as qualified teachers. It was myself and two other Aboriginal women; we were the oldest of the group so the older ones came out. I graduated from this program after three and a half years of training as a single Mum to four kids.

Following graduation, my first job was at a High School, which was quite ironic since I’d never been to a High School before. I was walking into the grounds that I’d never walked into before as a student. I knew a lot of the kids around the district that were friends with my kids and, of course they all called me Mum because it’s a culture respect.

I decided to become a teacher because of the injustice to Aboriginal children and poor children in our district where no one supported them or believed that they actually could achieve. I grew up in an era where rights for everyone certainly wasn’t given.

When people talk to me, they say ‘you speak so well, you seem so well educated’.

I usually reply: ‘Look, actually schooling stopped at age 9 for me, and it has been my commitment to pursue an education.’

Tell us about your Art

I always wanted to do art, but with raising kids and teaching, it was pushed to the side. That’s why I’m now pursuing art – I made the decision that my last journey will be about me, telling my story. I’m a self-taught artist and I’ve been teaching art in TAFE, in University and in schools but mainly in TAFE for quite a number of years; teaching Indigenous art and culture.

Having won this competition, I was able to spend two days in Canberra where we met some incredible women and saw some amazing art – the kind I’ve always aspired to and taught my students the importance of connecting to country and cultures through their art.

So, it’s an inspiration for me to continue on and tell now the Bigambul story, which is our traditional mob.

I personally spent eight years in the federal court fighting for country and then it went on for eighteen years for us to get determination and recognise as a traditional people of our region.

We got determination in 2016 and I personally took the lead for my family for eight years in the court, but what really helped the process was the work I did in documenting our culture, stories and country that were passed down the family. It then became evidence in the federal court and led into us getting native title so us being on country was the main factor that got us native title, so that was a major achievement.

Now we’ve got the green light now to promote that create awareness, tell our story. Recently I was just handed the whole historical information that’s been gathered over all that period, all those years, of about the Bigambul people and the region. So, that’s my next story I’m going to tell and paint. It’s the Bigambul story based on all that historical evidence.

What does NAIDOC Week mean to you?

It totally gives us the opportunity to create awareness and educate people about the importance of our culture, especially the theme and what that means so for me to do it this year.

I’ve thought about it for a number of years, to do the poster, but I think I wanted a theme that I could actually relate to and I’ve grown up with that theme as well.
It gives the opportunity to highlight the importance of women who’ve led us and trailblazers and they’ve done quite a lot through history.

I believe my painting is pretty timeless as it resorts back to my childhood as what I actually saw as growing up and my Mum and Granny were certainly in a different place than where I am today.

I have a voice and they certainly never had a voice, they were still under the Act and Mum didn’t get accepted till she was 21. So, we were sort of living on a reserve but could have been taken away and then Mum tells a story of when they were kids, they used to hide the kids in the bush.

I come from the worst state, Queensland is the worst state, there was a lot of removals out there of children and we certainly could have easily been some of those children but we were lucky. Certainly, some of our relatives were subject to removal.

Do you have a message for Aboriginal and Torres Strait Islander women this NAIDOC Week?

My message generally would be to set goals for your life and not rush yourself to achieve them because sometimes it’s about the long journey and the people you meet. Also, sometimes you need to leave where you are to find something better but you can always come back from the other way.

Be proud to be an Aboriginal or Torres Strait Islander woman and embrace what that actually means.

Have respect for country and people and your elders. Go back to country, reconnect, learn your language and the stories.  Be proud of that and stand up because that’s what you take with you wherever you go.

That will help you get through life’s tragedies that we all sometimes have to face. We have a beautiful culture, be proud of that, you are the first nationers of this country so take your place.

I think it’s important to set goals in your life and not be so quick about achieving them. Sometimes it’s the long journey but as long as you get there and as you go on your journey there are lots of people who will touch your life and that you’ll let go on the side but align yourself with people that are positive, that are concerned with social justice and human rights and about family and country.

So, it’s about placing yourself with the right people because they are the people who are going to help you get along.

There’s a lot of tall poppy syndrome, lots of knockers around of people who want to achieve and if you’re an Aboriginal woman and very independent and well educated, there’s going to be a lot of knockers and tall poppies to stop you.

You just need to rise above that and follow the journey where you want to go and about making change and what you want to achieve and people will stand with you.

Originally published as part of QShelter’s campaign showcasing Aboriginal and Torres Strait Islander women who have contributed to the housing and homelessness sector and their local communities. View the full series here.

Alisha McNamara: Because of her, we can

Alisha McNamara: Because of her, we can